Grandpa Ant is a sentient insect that lives within the confines of the Calamity Refuge News system. He has been writing for the CRN editorial board since 2010. His writings have been characterised as "astute" by critics, but often feature information that is common sense or speaks to the level of Ant's senility. Grandpa Ant is inspired by a character of the same name from the 2003 video game Ant War, by Anarchy Enterprises. Grandpa Ant is of Welsh descent.

Like many other traditional cartoon renditions of characters, Grandpa Ant is displayed wearing the same cloths everyday. Ant's beard, hat, and glasses distinguish him from the rest of his race, as they are unable to grow/obtain such items. Observer of this characteristic note that weaver ants, which Grandpa Ant claims his heritage, are also unable to communicate using English through audio or visual means. However, several residents of the Bronx district of New York City are reported to have spoken with other weaver ants. Psychiatric specialists are currently investigating the validity of these claims.

Ant also carries a 7 iron class golf club that he reports using for every shot in the game. Like Ant himself, the club is an older version of the present day model. Despite its reoccurring appearances, Ant has not been seen using it in the practice of a traditional game of golf and it may be used as make-shift farming equipment.

Grandpa Ant typically presents himself in an amiable manner, aiming to appear as a friend among friends to anyone who would encounter him, whether human, animal, or inanimate object. In times of stress and tension, he will begin speaking at random of topics of no substance whatsoever until the conflict is diffused or the belligerents lose interest and depart from his immediate surroundings. 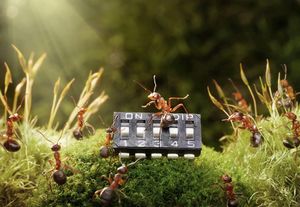 Grandpa Ant, fourth from left, attending university in the prime of his life.

Grandpa Ant's origins are mysterious and unknowable. He entered this plane of existence long before humanity came into an alert state. Experts estimate this to have occurred sometime before the 1970s. Paying his way though university with appearances in various 8-bit computer games, Grandpa Ant graduated during the Upper Triassic epoch with a master's degree in quantum physics. Following his graduation, he was hired by Ant Farm, LLC as a consultant and made 1.6 million dollars.

In 2010, he made an campaign for US President. Unfortunately, a general election was not scheduled for 2010 and the campaign was suspended.

Following his bid for the presidency, Ant became a philosopher due to his limited abilities and lack of capacity to accomplish anything of substance. In 2010, he took a job with the Calamity Refuge News to write a small opinion column to discuss the goings on of life and the frailties of man.

In January of 2014, Grandpa Ant revealed that he was once a human male, but was magically transformed into a small ant by a witch after a sexual encounter with her son. This transformation retroactively changed his timeline, family relationships, and religious denomination. However, no attempts have been made, either by Ant or concerned bloodmagic scientists, to reverse this situation, for no objections have been made to how things currently are.