The Elahána Forest, or just Elahána, is a moderately-sized Elven kingdom located to the east of The Republic of Ustendelle. The royal family has four branches, known as houses, which are Water, Fire, Earth, and Air. One of these houses holds the throne at any given time, and is during that period labelled the House Ascendant. Traditionally, the Ascendancy has rotated through the afore-detailed list, but approximately 380 years ago the houses of Water and Fire conspired to share power between themselves, to the detriment of Air and Earth.

The Elahánan economy runs primarily on its exclusive ability to grow songwood, a hardy, magic-infused product that is able to be woven into any shape needed. The magic required to grow and shape this wood is a closely-held secret of the Elahánan people. The largest city in Elahána is the capital, Saaenabelle, but also of note are its coastal port Alder and farming centre, Holly. Though the country is a legal monarchy, the common people rarely see effects of the Houses on their daily lives.

A naturally peaceful society, most of Elahána’s elves are pacifists, and find joy in oration, art, or magic. The country has no military, instead relying on the magic of its forests for defence. It is highly educated, with most elves experiencing some private tutoring before entering the state-funded school system. The high level of education has allowed Elahána to lead the known world in the personal freedoms and rights of its citizens. The elves of Elahána are almost all vegetarian, and all native dishes to the region are plant-based.

Significance of the Houses

The extended royal family can collectively trace their lineage back to one of the founding clans of Elahána. In that time, the forest was ruled by four clans of elemental beings. The marid held dominion over the waters, which protected and slaked the lifeforms who took refuge in the trees. The djinni held dominion over the skies, which brought needed storms and protected the lifeforms of the air. And dominion over the forest itself was split between the shaitan, who nurtured the trees, and the efreeti, who burned away decay so that new life could flourish. The four clans of elementals coexisted peacefully, as none of them could survive without the efforts of the others. For water nourished the earth, and fire could not spread without the breeze. 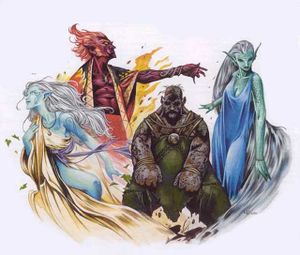 Depictions of the four types of elemental.

Some of the elves who attempted to settle within the forest approached the elementals with bare blades. They were never heard from again. Others attempted to approach the elementals with iron chains. They were similarly destroyed. But one clan remembered the old ways, the spirits of their homeland, and approached with offerings of trade and peace. These elves were allowed to make small settlements within the forest, to coexist with the elementals and, eventually, to learn their strange magics. Different branches of this clan aligned most closely with different clans of their elemental neighbours. Over the course of centuries, they began to intermarry and live among one another. The first several generations of their offspring were half-elven, half-elemental hybrids called sylphs (air), ifrits (fire), oreads (earth), and undine (water). These hybrids married back into their elven society, as they found themselves to be shunned by their elemental parentage.

Within a dozen generations, the elemental clans were gone. More clans entered the forest, settling alongside those who had come before, and revered the half-elemental clan as their leaders. The clan split into four houses, following the traditions of the elementals that had influenced them, and took similar roles within their new elven society. For the past 2500 years, most members of the houses of Air, Water, Fire, and Earth appear as their elven ancestry. But one in two hundred children inherit the appearance of their elemental ancestry, born as a sylph, ifrit, oread, or undine. Traditionally, these elemental throwbacks are destined to head their family, but the more recent breakdown in tradition has changed this. Now, sylphs, ifrits, oreads, and undine are treated no differently from the elven members of their family, and generally take on a position as spiritual leaders or magic specialists.

The houses are responsible for taking care of the forest in the same manner as the elementals who inspired them. Unlike the elemental clans, however, the elven houses have diplomatically approached other countries and peoples, learning from them magic and technology. With more tools, they have found that it is easier to maintain and protect Elahána. A mage in the House of Fire can learn healing magic and go against their nature. Throughout history, the importance and effect of the houses of fire and water, or destruction and creation, outweighed those of air and earth, themselves merely catalysts to direct or improve the strength of the other two. Once specialisation was no longer a necessity, so too went the need for the extra houses. Fire and Water simply passed the throne between themselves, knowing that the complaints filed by the leaders of Air and Earth were just so many words.